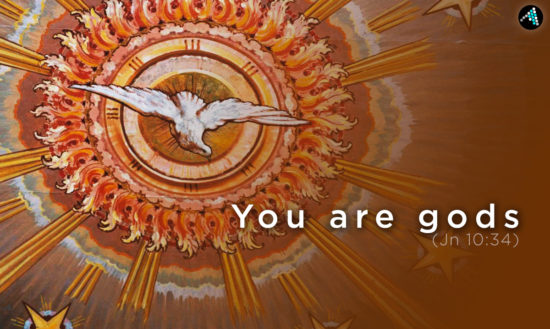 What does the Bible mean by the word “god” [Heb. elohim; Gk. theos]?

First, the plural ending of the Hebrew word for “god,” elohim, is traditionally believed to be a plural of honor or majesty. It’s like capitalizing the word “God” instead of writing “god”. The Hebrews sought to intensify or amplify the word because they believed, unlike their polytheistic-pagan neighbors, that theirs was the Only Deity Who embodied all things elohim. Hence, we find this unique title given to the God of Israel: “Elohim of elohim” [Deu 10.17; Ps 136.2; Dan 2.47; 11.36].

A better answer would be that the Hebrew language had many other words that are plural in form, but singular in meaning like “face,” “teacher,” etc. Nevertheless, when the ancient Hebrews referred to their one and only elohim they did not mean to say “Gods” but something like, “the Great, the Mighty One God” [cp. Josh 22.22]. Older Hebrew grammars called this a plural of majesty or excellence; plural of greatness or fullness of power and might; or a plural of intensification.[1]

Exodus 18:21–22 tells us Moses appointed a group of officials to serve as judges to relieve some of the burden of leadership which he alone had carried since leaving Egypt. Some 40 years earlier! Their magisterial role is mentioned frequently in the Hebrew Scriptures (Deut 16:18; 19:16–18; 21:1–4, 20). Later, after Israel’s military conquests of Canaan, different offices were established to serve the people [elders, Josh 7:6; 8:33; leaders, 1:10; 3:2; 8:33]. Their function was to council people like Joshua on administrative and military issues, carrying out their orders in organizing and keeping order in the camp, as well as performing important ritual and covenant-making duties (see Ex 24:1; Num 11:16).[2]

Yet, even before the official institution of these leaders scripture tells us that Moses was made elohim, Aaron his prophet, so he could stand-in as the God of Israel’s representative in the pagan court of Pharaoh (Ex 4.16; 7:1). And even though elohim was not the common title for the Jewish judges, when used in their legal sense, it was employed not strictly but figuratively. This is because the judges were instructed to “judge not for man but for YHWH [since] the judgment remains with God [alone]” (Deu 1.17; 2Chro 19.6).

So, then, it came to be understood that these human judges were in some sense regarded as divine representatives or as bearers of divine authority and majesty. Not only to the people of Israel but to other nations as well.

“Elohim may describe beings who were thought, as superhuman, to partake of the Elohim-nature, though they were not on that account regarded as objects of worship…Accordingly, we ought probably to explain Gen 1.26 in the same way…Man is formed in the Elohim-mould, borne by God, and possessed in some sense by angelic beings…The titles Elim, Elohim are used in some few cases of men, as possessors of God-like power or rank. Such may be the use of Elim in Job 41.25[7]; Ezek. 17.13; 32.21; 2Kings 24.15, where the R.V. adopts the rendering mighty. Moses is to become Elohim in relation to Aaron [and] again he is to be Elohim to Pharaoh [Ex 4.16; 7.1]…Elohim is employed to denote judges or rulers, either as acting as God’s representatives, or as exercising a power which is God-like. So Ex 21.6; 22.8-9, 28; 1Sam 2.25; Ps 82.6…So also, the Elohim of Ps 138.1, in whose presence the psalmist will sing praises to God, may perhaps denote earthly potentates…And, once more, the intensive plural Elohim appears, upon the only tenable explanation, to be used in Ps 45.6[8] of the King who forms the subject of the poem…”[9]

The reference in Ps 82.1“undoubtedly [refers] to magistrates [judges], and the idea is, that they were to be regarded as representatives of God; as acting in his name; and as those, therefore, to whom, in a subordinate sense, the name gods might be given. Compare Psalm 82:6…they were the representatives of the divine sovereignty in the administration of justice. Compare Rom 13:1-2, 6. They were, in a sense, gods to other people; but they were not to forget that God stood among them as their God; that if they were exalted to a high rank in respect to their fellow men, they were, nevertheless, subject to the One to whom the name of God belonged in the highest sense.”[10]

“The closest analogy to the use of the word (or title) ‘god’ for Jesus, however, is the use of such a term for Moses. Already Ex. 7.1 says that God makes Moses god to Pharaoh; and even before that Ex. 4:16 makes nearly the same claim (le lohim, ‘as god’) of Moses in his relation to Aaron. Consequently, Philo [1st century Jewish philosopher from Alexandria] does not hesitate to call Moses god, and in quite an unrestricted sense: ‘for [Moses] was called god and king of the whole people, for he was said to enter the dark cloud wherein was God’ (Life Mos. 1.158)…it is clear that by calling Moses god, Philo does not actually equate Moses with the supreme God, just as it is clear that the Johannine Christians, by calling Jesus god, do not actually equate him with the supreme God, inasmuch as Jesus is in Johannine tradition otherwise Son of God and the revealer sent from heaven. Beyond Philo, the divine appellation adheres to Moses when Josephus calls him a theios aner (‘divine man’, AF 3.180). One may suspect, on the basis of this evidence, that there was some connection between the equation of Jesus with God in the Fourth Gospel and the comparison of Jesus to Moses.”[11]

NBV: Heap no abuse upon judges and do not curse a ruler of your people.” Footnote: Again the name Elohim is used, which usually stands for God, but balanced, Hebrew fashion, with “rulers” in the next clause, it must denote judges as it did previously.

[8] The messianic king may be called elohim in Psalm 45:6, although the Hebrew can be legitimately translated as: “Your throne is Elohim forever and ever.” Isaiah uses the ancient word El in two messianic titles: Immanu-El (7:14, 8:8) and El Gibbor (“mighty warrior”, 9:5).

Did Jesus say he was God?