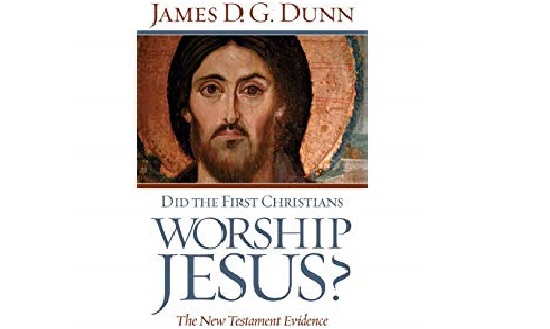 Did the First Christians Worship Jesus? by James Dunn.

A persistent theme of [Hurtado’s, One God, One Lord] is that, though the language used to speak of Jesus has various precedents in Jewish tradition, nevertheless the Jewish-Christian worship of Christ is without precedent. Nowhere do we find any suggestion that the worship of any exalted being other than God alone was admissible, let alone actual. However, there is one speculative theme overlooked in this analysis that may be quite significant, the only theme which portrays the legitimate worship of someone other than God. The notion that Adam had been worshipped may have provided a crucial warrant for the worship of Christ.

I will argue that the worship of Jesus Christ was partially legitimated in its Jewish context by the principle that the worship of the image of God, insofar as it is a visible or physical manifestation of God, is within the bounds of Torah. This principle (which for the sake of convenience I shall call the Legitimacy Principle) finds a place also in Adam speculation and, judging from the Adamic imagery with which the visible manifestation of God in Christ is portrayed, it may well owe its origin to the influence of Adam speculation. The argument is not conclusive, but the facts are sufficiently suggestive to merit further scholarly examination.

While the Wisdom theme lacks the motifs of manifestation and sovereignty, Adam speculation on the other hand does not present him as a primordial principle of order. Adam is within creation rather than above and before it. It is possible to take exception to this point, for there emerged a concept of Adam as a macrocosmic divine being, in whom God is given form and in whom the whole of creation is prefigured. This First Adam is a principle of order in the sense that he represents the pattern of creation and does the actual work of creation. This idea finds its most extreme expression in later Jewish literature where Metatron is identified with the primoridal Adam, Adam Kadmon, who sits on the Merkabah throne and whom the Shiur Komah refers to as Yotser Bereshith, the creator of the cosmos. G.G. Stroumsa has argued that already in the first century CE ‘there existed…a cluster of mythologpumena about the archangelic hypostasis of God, also identified with the First Adam…whose body possessed cosmic dimensions’. If such a theme did exist at an early date, it does not necessarily invalidate the observation that Adam was not generally deemed a principle of order, in contrast to Wisdom. The notion of an ordering archangelic hypostasis was not limited to Adam speculation, though it did come to draw Adam speculation within its orbit. Perhaps the emergence of a primordial Adam illustrates the merging of Wisdom and Adam motifs under the influence of Hellenistic notions of the cosmos as a macranthropos. Whatever was operative in this distinctive development, there is evidence that Wisdom and Adam motifs did converge [see Philo].