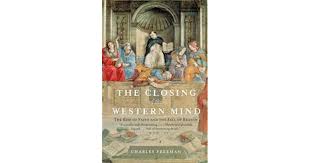 It was common for students in the Greek world to go from one school of philosophy to another, listening to debates and querying positions taken, and unless Christians were able to take part in such debates, Christianity was unlikely to achieve intellectual respectability.

In a growing church, most Christians at any one time were converts, and there were many who had had a traditional training in philosophy either before encountering Christianity or while waiting for baptism.

Some kind of accommodation had to be made with Greek philosophy.

The Christian Justin Martyr (c. 100-C. 165), a Platonist by training, was among the first to argue that Christianity could draw on both scriptures and Greek philosophy and could even appropriate philosophy for its own ends.

“Whatever good they (the philosophers) taught belongs to us Christians.”

He was echoed by Clement of Alexandria (c. 150-C. 215), who claimed that God had given philosophy to the Greeks as “a schoolmaster” until the coming of the Lord as “… a preparation which paved the way towards perfection in Christ.”

“If those who are called philosophers, and especially the Platonists, have aught that is true and in harmony with our faith, we are not only not to shrink from it, but to claim it for our own use from those who have unlawful [sic] use of it…,” added Augustine some 200 years later.

Whether the pagan philosophers were able to recognize the fact or not, their concept of logos, reasoning power, could be equated with the logos that was Christ. This strand of thought was developed so that Greek philosophers were even said to have absorbed “Christian” insights from the Old Testament, which they were assumed to have read.

The theologian and historian Eusebius claimed that it was possible to find almost all of Plato’s philosophy mirrored in the Old Testament. There was therefore no necessary contradiction between Greek philosophy and Christianity, but now that the logos had been incarnated as Jesus, the world had, Clement argued, moved into a new phase of history.

The pagan philosophers should not be discarded, but their writings should be studied in such a way that their “Christian” teachings were disentangled from the rest.

In the west, however, there continued to be a strong distrust of pagan philosophy, although Stoicism appears to have been an important influence for some, such as Tertullian.