Was Jesus The Great I AM?

The Rise of Christian Beliefs 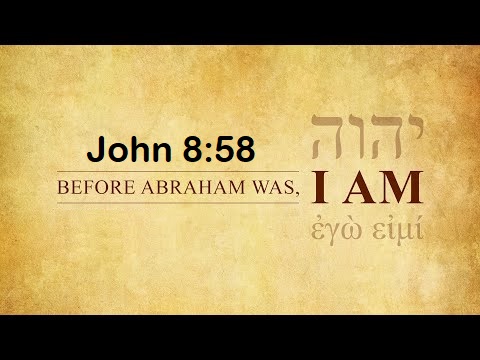 Commentators on the book of John frequently note a certain ambiguity in the sayings of Jesus, especially in connection with the failure of the hostile Jewish audience to grasp what Jesus meant. Orthodoxy is often keen to side with the opinions of the Jews against Jesus. The Jews, it is argued, thought that Jesus was claiming to be God. Therefore he is. But Jesus’ hostile audience is not a safe guide to the intentions of Christ. We have already seen that Jesus had to correct the Jewish misunderstanding that he was claiming to be God. His claim was that he was the Son of God, which is the rank of a human being, not God. In John 8:58 there is an interesting grammatical ambiguity which makes a different translation possible. The standard rendering: “Before Abraham came to be, I am” is not the only way to render the Greek.

It may be that orthodoxy misreads this verse as a proof of a preexistent Christ. Only a few verses earlier Jesus had spoken of resurrection as conferring endless life on those who follow him (John 8:51). The Jews objected that this made Jesus superior to Abraham who was then dead. Jesus justifies his claim by pointing out that Abraham had in fact looked forward to the Messiah’s day. The Jews misunderstood Jesus to mean that he and Abraham were contemporaries (“Have you seen Abraham?”; John 8:53, 56, 57). It is possible that Jesus counters with the stupendous claim that he will precede Abraham in the resurrection. Before Abraham gains immortality in the resurrection, Jesus will already be alive and immortal. This would fully justify the claim to be superior to Abraham. “Coming to be” (the aorist infinitive of ginomai) is in fact used of resurrection in the Septuagint of Job 14:14: “I will wait until I come to be again.”

If the text is read as standard translations render it Jesus will have claimed to be the Messiah appointed from eternity. Or he may be stating his superiority to Abraham in another sense. Abraham anticipated the Messiah’s triumph. Jesus will indeed be enjoying endless life as the resurrected Savior long before Abraham reappears in the future resurrection.