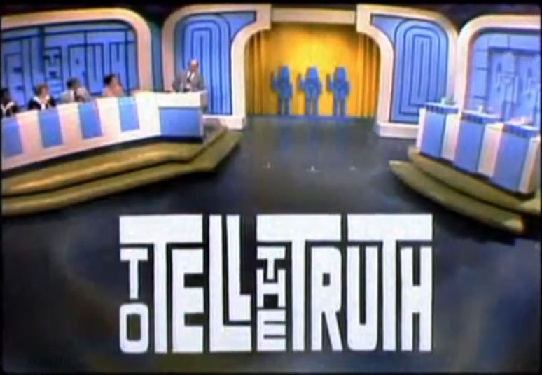 I was flipping through television channels one evening and came across an old program that I hadn’t seen in years. I don’t watch television game shows these days but this particular program fascinated me in my childhood. It was called “To Tell the Truth.”

For those of you who are unfamiliar with the program, it was structured much like a detective story. The show begins with a brief introduction of an interesting, but not well-known, person. Then three guests are presented for questioning. Each guest claims to be the person described in the introduction. A panel of celebrities is allowed to briefly question the three guests. At the end of the time allowed for questioning, each panel member must cast his vote for the guest he believes is really the person described in the introduction.

Each guest who received a vote earned a monetary reward. Each guest did his best to convince the panel through his answers and demeanor that he was the real person. After the panel finished casting their votes and explaining why they voted for a particular guest, the game show host would announce with great anticipation, “Will the real [insert name] please stand up!” The fun for the program viewer was not only watching the drama unfold but also hazarding a guess of his own.

Tension mounted as first one guest and then another feigned rising and then returned to their seats. The real person finally stood alone to thunderous applause and squeals of delight (from those who had correctly identified the real person) and gasps of disappointment (from those who had been fooled by an imposter). Each of the “imposters” was then asked to state his real name, where he was from and what he really did for a living. The panel members who had voted for one of the imposters then explained why they had been fooled. The duped panel members graciously endured the good-natured teasing they received from those who were not deceived and vowed to do better next time.

It may sound like a simple task to pick out the “real” person but many times the “imposters” garnered more votes than the “real” person. How were they able so often to fool the panel and viewing audience?

The “imposters” were confident with their answers, especially at the beginning. They had some knowledge of the “real” person’s biography and the better imposters had done additional research into the “real” person’s occupation. On the surface, they appeared to be the genuine article. It was only upon closer scrutiny that an astute questioner was (sometimes) able to entangle an imposter in the details and thereby expose him.

I wonder how the panel, and the viewing audience, would have fared if Jesus had been a guest on this program? Perhaps it would have gone something like this:

Announcer: “Good evening, ladies and gentlemen. Our featured guest this evening is a miracle worker! He heals the sick, restores sight to the blind and proclaims good news. He was born under unusual circumstances in the Roman occupied city of Bethlehem nearly 2000 years ago. Honored guests, will you please tell us your name?”

Panel question: “What does the term ‘Messiah’ mean?”

Guest 1: “It is the Hebrew form of my family name, Christ.”

Guest 2: “It is the Hebrew title that identifies me as the second person in the Godhead.”

Guest 3: “It is a Hebrew word which literally means ‘anointed one’ and indicates that I am an agent of God, a man appointed by Him to act on His behalf.”

Question: “Which is the greatest commandment?”

Guest 1: “I gave ten commandments. They are equally important.”

Guest 2: “I gave many commandments in addition to the ten. The most important is to love your neighbor.”

Question: “What is the gospel?”

Guest 1: “I died so that those who believe in me will never die but will live with me forever in heaven.”

Guest 2: “I am the second member of the triune God who lived as a man and died for the sins of those men I predestined to receive a reward in heaven.”

Guest 3: “The good news about the Kingdom of God and how it may be attained by those that believe the message.”

Question: “Did you really die on the cross?”

Question: “By whose authority do you heal the sick and forgive men their sins?”

Guest 1: “By my authority as a member of the triune God of Abraham, Isaac and Jacob.”

Guest 2: “I need no one’s authority to perform these and other miracles.”

Guest 3: “By the authority granted to me by my Father, the only true God.”

Question: “What was your first miracle?”

Guest 1: “Creating the heavens and the earth from nothing.”

Guest 2: “Incarnating myself as a human being.”

Guest 3: “Turning water into wine at a wedding.”

Question: “What do the saints do in heaven?”

Guest 1: “They continually sing praises to me.”

Guest 2: “They intercede for sinful believers.”

Guest 3: “They are not in heaven. Those who have died are sleeping in their graves awaiting the resurrection. Those who are living are working to make more disciples.”

Guest 1: “I have them consciously tortured in hell for eternity the instant they die.”

Guest 2: “I allow Satan and the demons to torment their souls forever in Hades.”

Guest 3: “I will one day judge them by their deeds and they shall die a second death in the lake of fire.”

Question: “When will you be coming back to the earth?”

Guest 2: “I come back each time a believer dies.”

Panel follow-up question for guest number 3: “Please clarify your last answer. I thought you knew everything?”

Announcer: “I’m sorry, guest number three. We are out of time for today. Panel, please cast your votes. Is the real Jesus guest number 1, guest number 2 or guest number 3? We’ll find out after we break for a message from our sponsor.”

Announcer: “Welcome back to ‘To Tell the Truth’! I hope you enjoyed the important commercial message brought to you by our sponsor. Remember folks, those in the know are rushing to buy Mr. Sparkle toothpaste/car polish. On the job or on the road, you’ll be sure to blind others with that Mr. Sparkle shine! And now for the moment you have all been anxiously awaiting. Will the real Jesus of Nazareth please stand up?”

We are almost out of time. How will we make this critical decision? All three guests look the part. Each one sounds religious and sincere. Their answers are similar but definitely not identical. Some responses were long; some were short. Maybe only the real Jesus could provide long, detailed answers. But maybe not!

Each guest responded to questions using technical terms and concepts we have heard before but since we aren’t trained ministers, may not fully understand. Some of the concepts expressed by guest number 3 sounded a little foreign. I noticed that the people sitting around me didn’t take him too seriously.

Maybe that is enough to eliminate him from further consideration?

The man sitting to my left occasionally goes to church; surely he ought to at least have enough secondhand knowledge to know which guest is really Jesus. He’s not sure but he thinks that Jesus might be guest number 1. Maybe we should just go along with him?

But on the other hand, the lady sitting to my right attends church regularly and she goes on and on about how much she loves Jesus. She isn’t concerned about the responses that were given but she is certain that the real Jesus is guest number 2. She has been exuberantly singing and waving her hands in the air throughout the program. I’d like to engage her in further conversation but she has begun speaking in a language I don’t understand and has suddenly fallen over backwards. She scares me a little but she is obviously a very spiritual person, convinced that she is following the real Jesus. Is it safe for us to rely on her judgment?

Fortunately we don’t have to rely on those with secondhand knowledge or those who are “spiritual” and sincere. Maybe they have it right but there is a very real possibility that they are carelessly following a shrewd counterfeit Jesus without even realizing it. Jesus warned that there will come a day when he says to those who thought they were followers but were not, “I never knew you; depart from me, you who practice lawlessness.” How devastating will it be for those who hear Jesus speak these words to them when they are expecting to hear that they were good and faithful servants? Someday we are all going to be held accountable for what we believe. There is too much at stake to let others do our thinking for us.

Those who follow Jesus listen and respond to what he says. “My sheep hear my voice.” But of course the imposter also beckons the sheep. The imposter will not plainly announce to the sheep that he is an imposter. Few would be deceived if he were this transparent. He will deceive the careless sheep, those not belonging to Jesus, by mixing truth with lies.

How then can we, the sheep, discern the voice of the real Jesus from that of a counterfeit Jesus? By paying close attention to the words that are being put into the mouth of “Jesus” and diligently comparing them with the Scriptures. A counterfeit Jesus will deceive the unsuspecting but will not be able to stand up under close scrutiny.

In his second letter to the church at Corinth, Paul chided the congregation for accepting “another Jesus.” Did you pick out the real Jesus in our example or, like some of the Corinthians in Paul’s day; have you been misled into accepting an imposter? Maybe we should all take a second look at the guests’ responses before being quick to answer.  What do we have to lose by reexamining our faith? Those who accept “another Jesus” risk perishing by dying a second time.  Those who accept the real Jesus will be rewarded at his return with life in the kingdom of God.  It’s worth taking a second look.