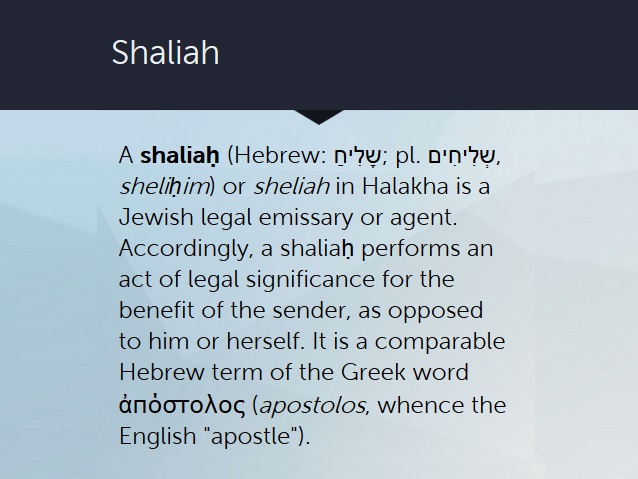 “Agent (Heb. Shaliah): The main point of the Jewish law of agency is expressed in the dictum, “a person’s agent is regarded as the person himself” (Ned. 72B; Kidd, 41b). Therefore any act committed by a duly appointed agent is regarded as having been committed by the principal, who therefore bears full responsibility for it with consequent complete absence of liability on the part of the agent.”

“Jesus is thus a faithful shaliach, or agent; Jewish law taught that the man’s agent was as a man himself (backed by his full authority), to the extent that the agent faithfully represented him. Moses and the Old Testament prophets were sometimes viewed as God’s agents.”

Dictionary of the Later New Testament & Its Developments, eds. Martin, Davids, “Christianity and Judaism: Partings of The Ways”, 3.2. Johannine Christology.

“Johannine christology appears to have been fashioned from Jewish wisdom ideas and the related concept of the shaliach (lit. “one who is sent” from heaven; shaliach in Hebrew, apostolos in Greek). Shaliach and wisdom ideas were easily exploited by first-century Christians who were trying to explain to themselves and to others who Jesus was and what was the nature of his relationship to God. In the Fourth Gospel Jesus is presented as the Word that became flesh (Jn 1:1, 14). The function of the Johannine “Word” (logos) approximates that of Wisdom, which in biblical and postbiblical traditions is sometimes personified (Prov 8:1–9:6; Sir 24:1–34; one should note that in Sir 24:3, Wisdom is identified as the word that proceeds from God’s mouth). As God’s shaliach (see Jn 13:16; 17:3; cf. Mt 15:24; Lk 4:18, 43; Heb 3:1) Jesus is able to reveal the Father (Jn 14:9: “He who has seen me has seen the father”) and complete his “work” on earth (Jn 17:4: “I have accomplished the work which you gave me to do”)…..

In three passages Jesus is accused of blaspheming for claiming divine privilege and prerogatives. In the first passage Jesus supposedly breaks the sabbath by healing a man and then intensifies the ensuing controversy by referring to God as his Father (Jn 5:16–18). Jesus’ critics infer from this claim that Jesus has made himself “equal with God.” The second passage is similar. In it Jesus affirms, “I and the Father are one” (Jn 10:30). His critics take up stones to stone him, because, athough only a human, Jesus has made himself God. But the meaning here is probably not that Jesus has literally claimed to be God. The claim to be one with God probably relates to the shaliach concept. As God’s representative, sent to do God’s work, Jesus can claim that he is “one” with the Father.”

R.A. Johnson, The One and the Many in the Israelite Conception of God, quoted by Juan Baixeras, “The Blasphemy of Jesus of Nazareth.”

“In Hebrew thought a patriarch’s personality extended through his entire household to his wives, his sons and their wives, his daughters, servants in his household and even in some sense his property…In a specialized sense when the patriarch as lord of his household deputized his trusted servant as his malak (his messenger or angel) the man was endowed with the authority and resources of his lord to represent him fully and transact business in his name. In Semitic thought this messenger-representative was conceived of as being personally — and in his very words — the presence of the sender.”

The origin of the apostolic office lies not in the juridical or civic Jewish institution as such but in the concept on which it is based, the idea expressed, for example in Mishnah Berakhot 5.5: ‘a man’s agent is like to himself.’ [This Jewish principle of agency is] the nucleus not only of the Jewish designation of shaliach, but also of the Christian apostolate as we find it in the NT….behind the Christian terminology is not primarily the functional aspect of being sent on a mission, connected with the Greek word [apostolos], but the specific Semitic and Jewish concept of representative authority which is implied in the designation of shaliach….As a matter of fact, St Paul’s letters are the only early document from which a reconstruction of apostolic self-consciousness seems at all possible [i.e.,] God or Christ is speaking through his mouth [1Thess 2.13; 2Cor 5.20; 13.3], like the prophet Jeremiah he is given authority to build up and destroy [2Cor 10.8; 13.10; and Gal 4.14]. Of course, this is reminiscent of [Matt 10.40; Luke 10.16. [In the OT] the Hebrew verb shalach is regularly used for the sending of prophets and the normal rendering of shalach in the Septuagint is apostellein [cp. Mat 23.34ff.]