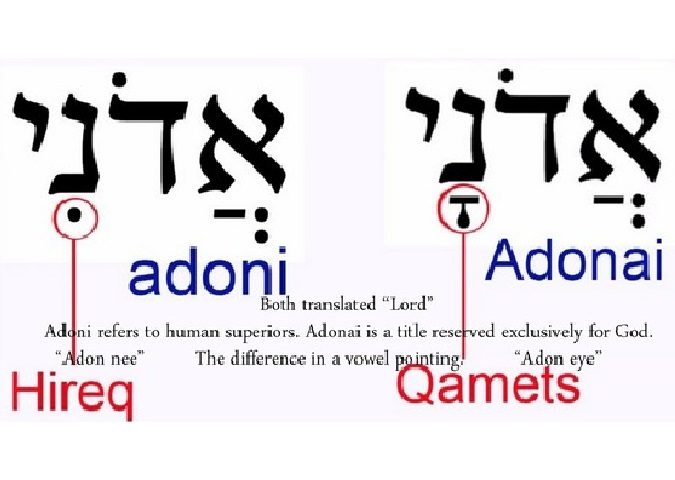 So back in the day when I read the amazing assertion that the Hebrew word translated in this verse as “Lord” was actually the Hebrew word adoni; and that this Hebrew word is never ever used in reference to Almighty God; that is, it is never ever used in reference to Deity, but solely used to refer to lords/masters who are not God, i.e. humans and angels, I was truly flabbergasted! I knew that this had amazing implications for defining who the Lord Jesus actually is! Jesus, the Apostles and the early church used this verse to define what they meant when they called Jesus of Nazareth “Lord”!

Since the Messiah is called adoni (my lord) and it is obvious that the Messiah was not and is not an angelic being (Heb. 1:5, 13; 2:5), it left only one possibility: Jesus is a bonafide human being. He was and is truly a man. And this man was called adoni because this man indeed was prophesied to be David’s lord as well as David’s son/descendant. This man therefore was foreordained to be the Messiah, David’s lord and our lord, by the One God, Yahweh God Almighty, who alone is Adonai.

Therefore, no Jewish reader of the OT/NT era in light of their Scriptures and their language would have ever imagined for one second that the Messiah was to be Deity, i.e. God Almighty. (Besides the obvious fact that to the Jews there is solely one Being/Person who is God Almighty, Yahweh; and therefore whoever Yahweh was speaking of could not be another Deity, another God! That would make two, and that’s an impossibility!) The word used to describe the lordship of the Messiah is the Hebrew word used for beings who are not Deity, who are not Almighty God!

As I said the implications were enormous. Anthony Buzzard in his writings asserted that the word adoni occurred 195 times in the Hebrew Bible, and in each occurrence it is used solely to refer to lords who were not God, i.e. humans and occasionally angels. Therefore, I had to investigate this claim to see whether those things were so (Acts 17:11). And to my amazement I discovered that this assertion is true!

My Christian walk has never been the same since. It caused me to have another look and revisit who Jesus is, and what the early church meant when they called Jesus of Nazareth, Lord!

Below is the list of the 195 occurrences of the word adoni in 163 verses, for your viewing. I have listed the NASB translation of each verse, and put in bold the actual English words translated from adoni.