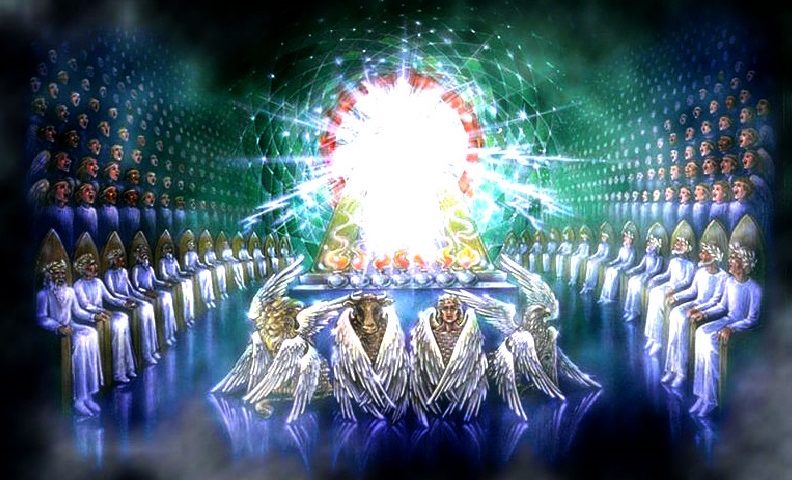 “Nothing accursed will be found there anymore. The throne of God and of the Lamb will be in it, and his servants will worship him.” Revelation 22.3 NABRE

This verse is a favorite “proof text” for some in the Jesus-is-God movement. Its importance lies in the fact that “In no case in the New Testament is there talk of offering cultic worship [latreuo] to Jesus [because] it refers always to the worship of God.” (Dr. James Dunn, Did the Early Christians Worship Jesus? pp 13-15.)

So is this the one exception to the rule? As we well know, exceptions are not the rule!

First, you will immediately note that there are two individuals, “God” and the “Lamb.” That’s why the writer uses the third person singular pronoun (“his,” “him”) as opposed to the third person plural pronoun (“their,” and “them”). So, if John was really saying that both “God” and the “Lamb” are receiving latreuo, he would’ve used plural pronouns so as not to confuse his audience!

After all, the Bible defines “the God,” “one God” or “only God” with singular personal pronouns!

Second, many scholars concede that it’s “possible to use latreuo for someone other than God but only in furtherance of the worship of the one God.” (Jones, “Distinguishing the Meaning of the Greek Verbs in the Semantic Domain for Worship,” FN 4, Nov. 1991, p 185.)

The most famous example appears in Dan 7.27 where the nations will “serve [latreuo] the saints of the most High God.” The Aramaic pelach is translated by Aquila as latreuo (the Theodotian LXX text renders pelach as the neutral douleuo). So it’s right for some translations of Daniel 7:27 to have “obey them” instead of “obey him” (RSV, NEB, GNB, Jewish Publication Society Translation).

Also, Israel is commanded to latreuo their enemies in Deu 28:38LXX and the nations latreuo Nebuchadnezzar in Judith 3.8LXX.

Third, there is a well-known 1st century Christian document known as the Sibylline Oracle (8.442-445) where latreuo is used for the “worship” of the first Adam by angels, no less!

So latreuo in the NT is not used for Jesus.

Even if it were OT and extra-biblical examples show that it can be used for others apart from God.