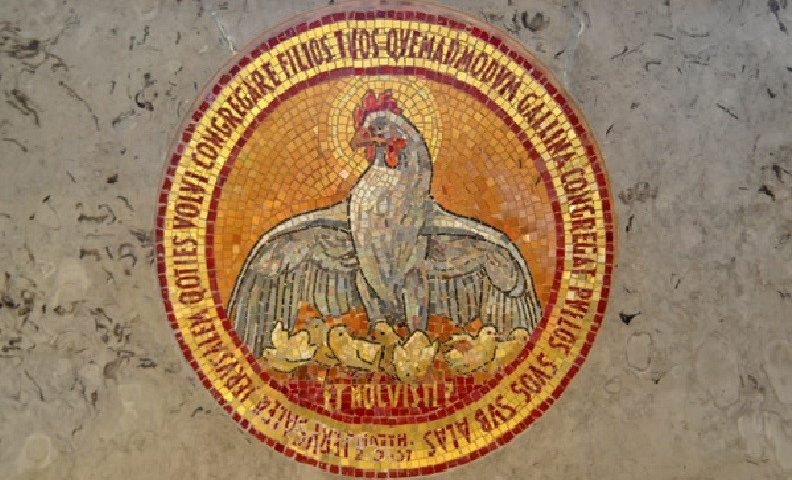 In Matthew 23:37 Jesus once again appropriates to himself a familiar “Yahweh text” that shows God sheltering people under His wings (most notably in the Psalms 17.8; 36.7; 57.1; 61.4; 63.7; 91.4). Many see in Jesus’ claim a veiled reference to his literal preexistence as Yahweh in the OT. Yet, most judicious scholars don’t even make this claim since it places an unnecessary and burdensome meaning to what Matthew is really saying about Jesus here.

For example, the New American Commentary (v.22, 1992, p 350) sees here a Lament for the Coming Destruction of the Temple where “these verses play a role in the larger discourse of chaps. 23-25 somewhat comparable to the role of Rom 9:1-5 in the context of Rom 9—11. Jesus, like Paul, demonstrates the extent of his identification with his people despite the harsh words he has for them elsewhere. Jesus’ outburst also reminds one of David’s tragic lament for Absalom in 2 Sam 18:33 and 1:24. Jesus is a Jew, these are his people, and this is his holy city. To the extent that he is conscious of the divine presence within him, his agony is greatly multiplied….So God in Christ withdraws from the people, even as Jesus leaves the temple.”

Another noted trinitarian commentary, the MacArthur New Testament, observes that OT prophets, like Jeremiah, “expressed similar grief when he considered the prospect of Judah’s being taken captive by Babylon because of her defiance of God (Jer. 13.17).”

This reflects the typical OT Jewish principle known as Shaliah, where prophets sometimes even speak in the first person as Yahweh Himself (cp. Modes, Deut. 29).

And world-renown scholar Bishop N.T. Wright sees here a picture of a hen protecting her chicks from a farm yard fire.

“When the fire has run its course, there will be found a dead hen, scorched and blackened, but with live chicks under her wing. Jesus seemed to be indicating his hope that he would take upon himself the judgment that was hanging over the nation and city.” (The Challenge of Jesus, 2000, p 62.)

So it makes sense for Jesus, not only as the agent of Yahweh but His own uniquely procreated Son, to assume here the divine role of savior of his people. His name after all means “Yahweh saves” (Mat 1:21). Not because Jesus was somehow a preexistent God who “took flesh,” let alone a 2nd Yahweh figure. But because he is “the word of God made flesh” and as such, embodies not only “the fullness of Deity” (Col 2:9) but more importantly the love and compassion His “only true God” and Father continues to show for all of humanity.

“This is good and pleases God our Savior, for he longs for all to be saved and to understand this truth:

For there is one God and one mediator between God and humankind, Christ Jesus, himself human.” (1Tim 2:3-5)