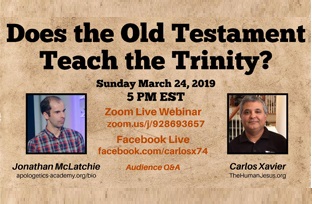 The scriptures clearly teach that the God of the OT, in fact the God of the entire Bible, is one Single individual, one Self, one He, one Person, I.e., the Father! This is why my opponent cannot possibly show that the OT actually teaches the doctrine he so boldly yet inconsistently professes.

To put it in simple terms: “hints and clues” do not a “teaching” make. And we all know that God, as the creator of language itself, is the most competent teacher there is. So if He teaches anything it must by definition be clearly shown and explained. But as we just heard from my opponent himself, there’s no Trinitarian to be found anywhere in the OT.

First, I showed that many trinitarian scholars concede this simple fact. This is not a new concession as Leonard Hodgson, noted Anglican priest, philosopher, theologian, historian of the early Church and Regius Professor of Divinity at Oxford (1944 – 1958) said:

Christianity “arose within Judaism and the monotheism of Judaism was then, as it is still, unitarian.”

Murray Harris in Jesus as God:

Second, I’ve shown that the biblical language cannot support the trinitarian language that had to be created hundreds of years later. This is shown and taught by Jesus in the first and most important of the commandments known: “Listen, Israel: the Lord, our God, is one Lord.”

Tens of thousands of singular personal pronouns cannot be ignored nor dissolved by a few rare exceptions. If the evidence were reversed, I.e., if God was referred to consistently as “they, them, their, we, us, our” thousands upon thousands of times we would obviously all come to a very different conclusion.

Third, according to Ps 110:1 the Bible is ultimately a story about 2 Lords: The one LORD God and the one lord Messiah, himself human (1Tim 2.5). Adonai is not adoni, a non-Deity title in all of its 195 occurrences. I have clearly shown this from both the Hebrew and the Greek.

If this were not enough evidence, the most used OT passage in the NT, Daniel 7:13-14, show that Jesus’ favorite self-designation (the son of man) is never Deity! What it shows is a clear distinction between the one Lord God (the Ancient of Days) Who gives all authority to the human being, the son of man.

The Biblical God is not an abstract idea, never an essence, never one What! And we look forward, eagerly with outstretched necks, to the day when…